Strife: legacy of the Eternals is a two-player card game that was recently released (via kickstarter) by V3G and designer Christopher Hamm. The game features identical sets of cards for each player, so a victory means you really did out play your opponent and didn’t win by the luck of the draw. Anyone who is looking for a two player game with deep strategic play should check this one out. Now on to game play! 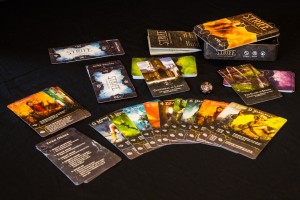 A game of Strife: Legacy of the Eternals is played over three rounds and starts out with both players gathering their identical hands of 10 cards, numbered 0 through 9. Each card has a battle ability and a legacy ability. The players’ champions (cards) will battle over locations placed in the center of the table in an effort to score more points than the other player. Every turn, each player will place one of their cards (called their Battle Champion) on the location furthest from the “location deck” with the only exception being the first turn where each player will play a second card in their “legacy pile” (called their Legacy Champion). Players’ Battle Champions activate their battle abilities in descending order followed by their Legacy Champions abilities, again in descending order. Both Battle and Legacy abilities, can effect the other player’s cards, change the location of the battle, etc. A round ends when each player is down to one card, which will become the player’s Legacy champion for the next round. 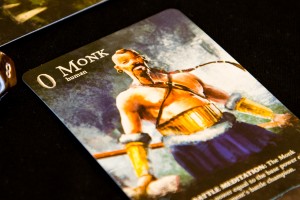 There are a ton of combinations and plays as in any given round there are 3,628,800 permutations. It is safe to say no two games of Strife will play the same. Winning a game of Strife really makes you feel as though you out played your opponent. Strife isn’t punishing to new players as can be the case with many strategic games. On most turns there are several good choices in each player’s hand. New players will tend to make mistakes, but a few mistakes won’t take you out of the game. In fact, after just 6 or 7 plays with the game, I really felt my strategy improving. I started anticipating my opponents moves, which adds a whole new dimension. Another great feature of this game is the artwork. The art work is absolutely stunning on the tarot sized cards. It felt as though my first few games seemed to go a bit slow but not because the game was confusing. The truth is I kept getting lost in the artwork.

My one criticisms of the game is minor. It would be helpful if the rulebook did cover some of the more confusing interactions between a few of the cards. Granted, explaining all of the interactions (4845 combinations of 4 cards out of 20) is out of the question yet after a few plays and searching the forums on Board Game Geek I felt I had a complete grasp of the rules.

Strife: legacy of the Eternals is an excellent game for those who are looking for more challenging 2-player game or who enjoy highly strategic game play. The game plays in under an hour, but can easily go faster especially if the players are familiar with each of the champions’ powers. It has quickly become an auto-include in my grab bag of travel games. In fact, this was one of the games I brought on my last trip out of town! I highly recommend the game, even for just the artwork alone! Give it a try, and if you like it, give it a buy!