Hi all, today I bring you another discussion (ramble)!,

While I was looking over some new games recently and was very tempted to make some new purchases. Unfortunately for me, but fortunately for my wallet, I have yet to complete my 10 x 10 challenge (see my previous post about “getting more out of your games” for details). This made me think, “what is it about a game that makes me want to buy it?”, “what considerations do I have when buying a new game”, and “What is it about the games I currently own that made them a good purchase?”. Well, let’s talk about each of these questions!

What makes me want to buy a game?

This is sort of complicated and doesn’t really follow a strict algorithm or rule. Part of what really grabs me about some games is the theme. “You mean we’re investigators investigating a haunted mansion full of Lovcraftian horrors?! Awesome!”. Sometimes the theme is the chief reason I want to try a game. Then again, some themes are just plain boring. “Ok, so we’re trading goods in the Mediterranean? Again?”. Other games, it’s purely the mechanics. The first example that comes to mind is the rebellion mechanic in Archipelago. You are competing over resources and control of regions but you must work together to quell the rebellion. Now, the idea of colonial expansion isn’t exactly my favorite, the mechanics inside the game gripped me. Other games are so pretty, I feel like I have to have them. Stone Age was like this for me. I didn’t find that the game was particularly innovative with it’s rules and mechanics, nor was the theme all that interesting to me. but once I saw the board, I knew I needed to have the game in my collection. Buying a game purely on looks really is like judging a book by its cover, though, so it obviously doesn’t guarantee the game is good, but at least it’ll look good on your shelf (but seriously, I don’t recommend buying on looks alone). 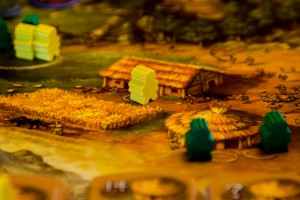 Really what makes a game irresistible is if it has a good “Elevator Pitch”, or the short summary of the game. Basically, the elevator pitch is how I’m going to convince my friends to sit down with me for the next 60-120 minutes on game night. Some games just sound irresistible. For example, I love explaining Escape: Curse of the Temple. When I teach the rules of Escape: Curse of the Temple, I go over rules regarding movement into an adjacent tile, rolling and re-rolling, etc. But I leave out the the fact that we have ten minutes to complete our objective and we are rolling as fast as we can, simultaneously. When I drop the fact that the game is played real-time, everyone at the table smiles. When I discovered the game, I had the same smile. If I think I can get my friends to get excited about the game, I get excited about the game. 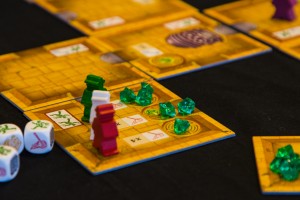 Escape: Curse of the Temple

What considerations do I have when buying a new game

The list of buying considerations sort of coincides with the things that make me want to buy a game. Theme, mechanics, would my game group like it, etc. These are all very good considerations. But there are two other considerations that help me “filter” my purchases. These filters are player count, and “do I have similar games?”.

New board games are released all of the time. A lot of these games are innovative with new components and new mechanics. But are they that different? A lot of games borrow the same mechanics within the game. This isn’t a bad thing at all, but it does factor into my board game buying decisions. If I have a game that plays very similarly, the new game has to really do something special or set itself apart from the game I currently own or else it just doesn’t feel like a good purchase. To date, I’ve really avoided this problem. There are games that do look very similar on paper, but just one or two tweaks can make the game a whole new experience. For example, Lords of Waterdeep and Stone Age are two light worker placement games. They both involve placing workers on a shared board of actions. They do NOT, however, feel the same. Stone Age introduces dice, which means you are not guaranteed a certain amount of resources when placing your worker(s) on an action. A simple thing like adding dice to the game made it a whole new experience.

What is it about the games I currently own that made them a good purchase?

A lot of people track their plays with the idea that the more you play a game, the better the purchase. It’s hard to disagree with that point of view, but I have a few (expensive) games that I have played only a handful of times that I feel were a good purchase. Other people live by the rule, “If after the first play I want to play it again, it was a good purchase”. I totally agree with this. So many of my favorite games are my favorites because I keep wanting to play them. But for me it’s not about the game, it’s about the people. If my friends enjoy the game and we have a good time playing it, the game was a good purchase. Games, for me, are a means to an end. I’m sure there are less expensive ways me and my buddies can hang out, but the beauty of games is that they are a common language of sorts. I can play the same game with my gaming friends as I could my non-gaming friends or my family! When we have a game night people feel compelled to join in and have a good time. So, while I may have just spent $30-40 on that new game, if we only played it once but had fun doing it, it was worth it in the end.