Diamonds is a card game that feels familiar but new at the same time. The game takes the simple idea of trick taking and distills that down to a quick game which gets you into the fun right away. Scoring is simple and fast, allowing even younger children to start planning plays and strategizing. Designer Mike Fitzgerald has done an excellent job of taking the parts of some classic card games that are fun, adding some new exciting elements, and doing away with the parts that are not so fun. I highly recommend the game for anyone who enjoys the “classic” card game.

Diamonds plays much like the classic card game “Hearts”, but instead of scoring based on the card values, you collect acrylic diamonds with special actions associated with each suit. Players will keep their diamonds in one of two places, their vault or their showroom. Diamonds in the showroom are one point and can be stolen. Diamonds in the vault are worth two points and are safe (no pun intended). The special actions include gaining a diamond in your vault, gaining a diamond in your showroom, stealing a diamond from another player’s showroom (and placing it in your own), or transferring a diamond from your showroom to your vault. Special actions are used by players when they win a trick, play out of suit (like in hearts), and after each round if they won the most cards of a given suit. There’s a few more rules, but it’s pretty much as simple as that.

Diamonds does a few things better than its ancestors. First off, scoring is quick and easy, something that’s always bothered me about “hearts”. Second (and without going into too much detail) you can combo some of the special actions to protect yourself from other players. Lastly, Diamonds plays excellently with two players with a variant that makes each player play two cards for each trick. Speaking of variants, there are three: 2-player variant, 4- or 6-player partner variant, and 2-5 player perfect information variant (forcing all cards to be dealt, instead of only part of the entire deck). 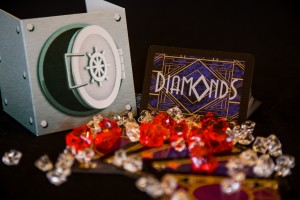 Look at these diamonds!

The only real negative I can say about this game is that you could play with just a deck of cards and not purchase anything* (with 4 or less players using the perfect information variant). But let’s be honest, you’re really buying the game for those awesome diamonds and the vaults to hide them behind! Personally, I think the game is well worth the $25 MSRP, given the quality of the components and how much play time this game will probably see.

So if you like the sound of the game, give Diamonds a shot and have fun playing!